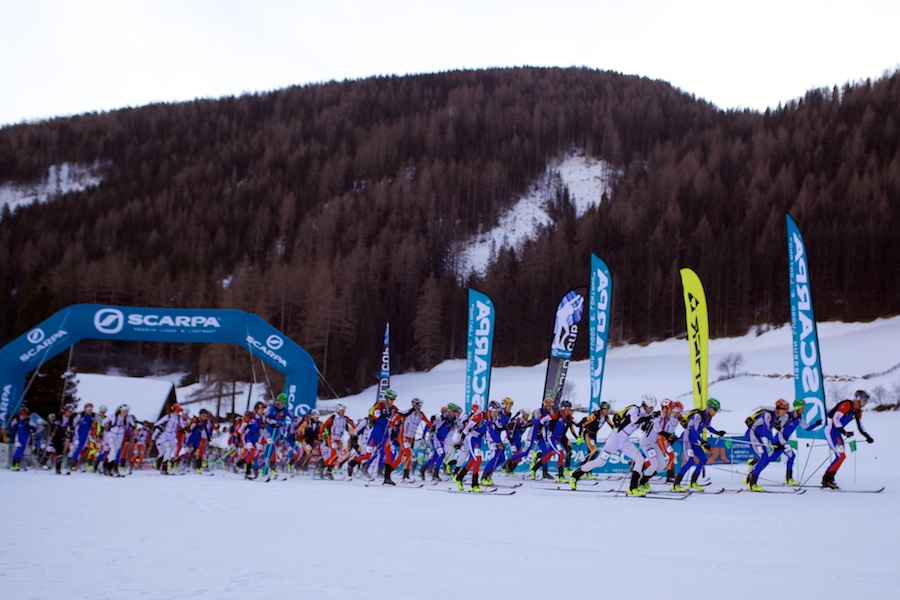 145 athletes set off rom the start in Valle Aurina

The race was open to various categories, both male and female for the World Cup with Senior, Espoir and Junior. Most famous amongst these from the world of ski mountaineering were perhaps Kilian Jornet Burgada, William Bon Mardion and the local hero, Manfred Reichegger, whilst the female presence was highlighted by the presence of Laetitia Roux, Maude Mathys and Gloriana Pellissier. Although the race track started out quite gently starting out from 1445m, it soon rose over the following 3km to 1960m above sea level, the final 700m levelling out a bit before the arrival at a height of 2020m

Kilian Jornet Burgada headed out into the lead from the start, this was challenged first by the Italian Lorenzo Holznecht, halfway through the race and subsequestly by William Bon Mardion and Mateo Jacquemoud of France. Jacquemoud, overtook his team mate to take second place on the podium 7.2 seconds behind the winner, in front of Bon Mardion(+18.8) whilst Kilian held on to his first place arriving with a winning time of 31’45. In the end Holznecht(Italy) came in fourth (+30.1) with his team mate Michele Boscacci, Italian Vertical Champion coming in 5th. Unfortunately local boy, Reichegger only managed to come in 8th (+57.9) only just a step behind another Italian team mate Robert Antonioli (+57.7). Although the italians may be disappointed by a lack of racers in the first 3 places they still managed to pull off 5 places within the top ten.

Laetitia Roux of France and Maude Mathys, Switzerland seemed to be evenly matched at the beginning, but in the second half Roux managed to pull away on the steeper part of the ascent to gain a convincing win in 38’49.7, with Mathys coming in second (39’26.3) . Gloriana Pellissier, Italy came in to take third place in this first ISMF Scarpa World Cup of the season, despite having suffered with a stitch, that nearly put her postion in jeopardy.

Kilian Jornet Burgada: «This morning I was feeling pretty good, in fact I feel quite surprised at how good, as I’ve been doing a lot of training and wondered whether I may have overdone it. For the first few minutes I was behind William Bon Mardian, then I decided to force the rhythm a bit and push away from the group. The first World Cup Race of the season has been organised really well, we were also lucky with the weather and the fact the the temperatures were not too low».

Laetitia Roux: «I feel in good form and feel really satisfied with this victory, even though my main objective is to take the title tomorrow morning in the Individual race. I managed to get out front almost straight away and held to this postion throughout the race».